John Smid Interview on Hardball - is this an 'ex-gay' tsunami?

John Smid admits to Chris Matthews on Hardball that his campaign to "Pray the Gay Away" never has worked and that he is still attracted to other men. Matthews interviews Smid on Hardball with Michelle Goldberg from The Daily Beast. 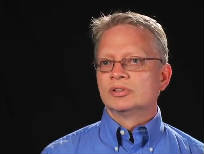 John Smid resigned as Executive Director of Love in Action in 2008, but has only now made statements that reveal how much he has shifted in his previous beliefs and attitudes. Love In Action, the flagship ex-gay ministry of Exodus International, shut down its residential program in 2007. In his recent statements John has distanced himself from the message he preached for years as the head of his ministry that promised, along with Exodus International, that ‘change is possible’.

John has been on a journey for some time, not unlike many of us, and is coming to greater revelations of his relationship not only with himself but also God and his wife. A new relationship has also come to light with those who used to be a part of the 'Love in Action' or who followed John's previous teachings. Many of those are hurt angry and some very damaged by the message of ignorance that homosexuality is a sin and God can heal you an make you heterosexual. Some forgive and understandably for others it brings anger and the pain.

It can take years to undo the years of personal ignorance about sexual orientation and overcome the religious conditioning that creates denial, shame and self hatred. It took me 26 years to work through all this personally and come to a place where I had a healthy view of myself, my orientation and the gay community. Some felt that his previous statements and apology didn't go far enough.

It’s an unfolding consciousness and journey to true freedom. Ignorance is what keeps us bound.

John’s recent honest statements and confessions demonstrate just how far he has come in his journey. Considering this, one does wonder how much longer Exodus and other ex-gay ministries can keep proclaiming the outdated message that homosexuality is a choice and that people can change from gay to straight. There have been leaders in the past who have left in scandal but here is John’s journey…quietly resigned from the organisation and slowly but surely entering a new life of honesty and authenticity. I am sure that some within the Exodus ministries will feel betrayed by John’s statements but others of us applaud his willingness to risk being open and honest.

To summarise the turnaround shifts, John now says same sex orientation is unchangeable, heterosexual marriage hasn’t change me or anyone else I know and you can be a Christian and gay. WOW! (but many of us found that out years ago). Welcome to our world John….you will find it to not be anywhere near as evil, destructive and fulfilling as it has been made out to be.

In his own words John Smid now says:

"One cannot repent of something that is unchangeable. I have gone through a tremendous amount of grief over the many years that I spoke of change, repentance, reorientation and such, when, barring some kind of miracle, none of this can occur with homosexuality."

"I also want to reiterate here that the transformation for the vast majority of homosexuals will not include a change of sexual orientation. Actually I’ve never met a man who experienced a change from homosexual to heterosexual."

"I used to define homosexuality or heterosexuality in terms describing one’s behaviour. I thought it made sense and through the years often wrote articles and talked from that perspective. Today, I understand why the gay community had such an issue with my writings. My perspective denied so many facets of the homosexual experience. I minimized a person’s life to just their sexuality but homosexuality is much more than sex."

"I would consider myself homosexual and yet in a marriage with a woman. My sexual desires, attractions and lifelong struggle with common factors relating to homosexuality are pretty much all in the classification of homosexual."

"I am homosexual, my wife is heterosexual. This creates a unique marriage experience that many do not understand. For many years I tried to fit into the box of heterosexuality. I tried my hardest to create heterosexuality in my life but this also created a lot of shame, a sense of failure, and discouragement. Nothing I did seemed to change me into a heterosexual even though I was in a marriage that included heterosexual behaviour."

"I hear story after story of men and women who accept themselves as being gay, in Christ, and finally find that life makes sense to them. Many are able to then nurture an authentic relationship with Christ because they are being honest and authentic with themselves and finally are able to accept His love unconditionally which changes the dynamic of their understanding of Him. Far too many homosexuals who are seeking Christ perceive that they cannot come close to Him if they remain a homosexual. In this mindset they search feverishly for change that will not come to them."

Anthony Venn-Brown is the co-founder and former leader of Freedom 2 b[e], Australia’s largest network of LGBT (lesbian, gay, bisexual, transgender) people from Christian backgrounds. He is also an educator and consultant on LGBT/faith issues and leader in deconstructing the ‘ex-gay’ myth. Anthony’s autobiography 'A Life of Unlearning', details his journey from married, high profile preacher in Australia’s mega-churches to living as an openly gay man. Anthony has been twice voted ‘One of the 25 Most Influential Gay and Lesbian Australians’ (2007 & 2009) and this year was one of four finalists for the ACON Community Hero Award.

Posted by Anthony Venn-Brown at 1:48 PM

Comments are not usually moderated. Everyone is entitled to their own opinion. If what you say is offensive, disrespectful or defamatory however, it will be deleted.

You have permission to quote from this article with recognition of the source. Thank you. info@abbi.org.au